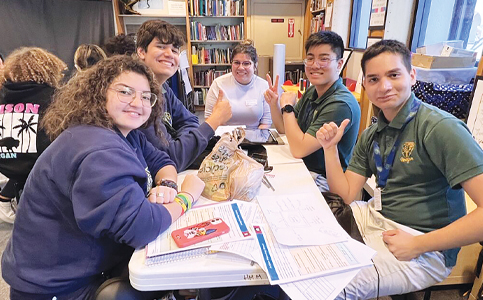 Cultural arts institutions are entering the new year with a diverse selection of artistic programming, experiences and educational outreach.

The Adrienne Arsht Center for the Performing Arts has forged a partnership with the Miami-Dade County Department of Cultural Affairs’ Culture Shock Miami to host free pop-up performances with the return of Family Fest.

Family Fest is one of Arsht Center’s programs committed to community engagement and deepening the experience of the performing arts for all residents.

Serving more than 105,000 people throughout 16 years, the programs have broadened community participation and opened the sights, sounds and possibilities of the world through the performing arts.

The next free performance is “Rita Finds Home,” presented by Miami City Ballet at the Arsht Center at 1300 Biscayne Blvd. in downtown Miami. The ballet showcase is about a young artist named Rita, who dreams of living in the big city despite the lush tropical island she calls home. “Rita Finds Home” is a co-commission with the Joffrey Ballet of Chicago and performed by the Miami City Ballet School.

On March 12, The Miami Children’s Chorus, The Children’s Voices Chorus, The Miami Sound Space Choir and The Civic Chorale of Greater Miami will hit the stage at the Arsht Center for a community sing-along. The “Big Sing” concert works towards a vision of a community where people of all ages can explore the joy of singing and highlights Miami-Dade’s choral community.

“The Ocean Lives There,” will feature the Greater Miami Youth Symphony at the Arsht Center. The April 15 performance celebrates Miami’s tropical culture as well as Florida-made music and literature, educating young musicians on the practice of new work, and providing an accessible and engaging musical experience for families.

GableStage’s longstanding education initiative that presents 40 performances at upwards of 20 Miami-Dade public and private schools each season is bringing Shakespeare into the schools.

Touring throughout March, all performances include a comprehensive, interactive study guide that is delivered in advance of the scheduled dates. The program is meant to expose high school students to classic text that is animated from the pages of Shakespeare and also provide recently graduated actors and stage managers with their first professional opportunities.
On March 7, GableStage will have a special performance of Shakespeare’s romantic comedy “Twelfth Night,” at 1200 Anastasia Ave. in Coral Gables.
Directed by New World School of the Arts’ Eddie Brown, the play tells of a shipwrecked woman navigating love and life in a new land. In this adaption, the coast of Illyria is replaced with the vast beaches of Miami, while Haiti stands in the place of the protagonist’s homeland of Messaline.
HistoryMiami Museum will be one of eight Smithsonian affiliates across the nation collaborating on Earth Optimism Youth Action and Leadership for Sustainable Communities (EOYAL), a two-year educational program designed to empower high school students to take environmental action on issues facing their community.
The museum will work with two groups of high school students and their teachers from Miami-Dade County Public Schools. The program’s overarching goal is to empower students, specifically from schools in vulnerable neighborhoods, who suffer disproportionately from climate change.

With the help of mentors, student teams will design an action plan for a specific issue that they will present to a jury of Smithsonian scientists and educators. Once completed, their work will be publicized on Smithsonian websites and social media platforms.
“Students will take on leadership roles and explore current environmental issues facing their communities,” said Olgasabrina Rueda, HistoryMiami’s manager of education and school Initiatives, “and will engage with local and national stakeholders as they create solutions to support local communities.”