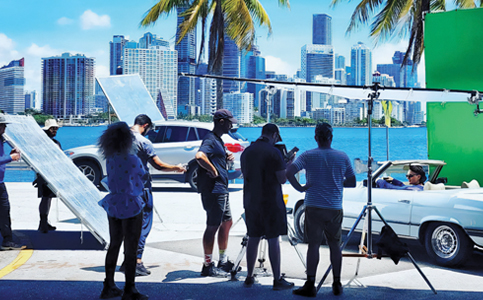 Miami-Dade County’s film industry is becoming one of the hottest global destinations, with no signs of slowing down in 2023.

There’s a huge appetite for a lot of film and TV productions wanting to come to the county, said Marco Giron, Miami-Dade County’s film and entertainment commissioner.

“We are very excited that continues to be the case,” he said, “and we’ll definitely focus ourselves and market ourselves in the world to make sure that we continue to have that appetite and productions here locally.”

Working to support major production companies that have moved here from locations like Los Angeles, the county has issued a little over 60 filming permits that have accounted for an estimated $19 million of direct economic spending just this month alone. In 2022, the Miami-Dade County Office of Film and Entertainment issued over 1,000 filming permits that generated over $300 million in direct spending into the county’s economy.

“We continue to lead the state as Miami-Dade County is still and continues to be the largest market by far with over 65% of all productions happening here in our area,” Mr. Giron added.

County commissioners recently approved an educational initiative where the office of film and entertainment will work closely with public schools and colleges to foster mentorship and additional education opportunities for students and young talent that wants to get into the field.

“It’s a long-term project but it’s very exciting for our office to do. It’s part of sustainability,” Mr. Giron said. “I think in order to have a sustainable industry, we have to have workers and young talent that we can keep here and they don’t have to leave Miami-Dade County to make that happen.”

“We’re also working on our current incentive program,” he continued. “One of the things that I spent a lot of last year doing was really meeting with a lot of industry players, both here locally and abroad, to have an understanding of where Miami-Dade County’s current market is, and we’ve identified that the current incentive program is something that we will be revisiting and we’re going to be making changes so that we can attract projects to our area.”

Continuing efforts to position the county as a one-stop shop for the film and entertainment industry, Mr. Giron said, he has initiated quarterly industry networking events.

“The purpose of these events is for our office to make major announcements,” he said. “It’s a good opportunity for everybody to come together in Miami-Dade County and have a conversation. We will also be doing workshops supporting small businesses that are tied to the film industry.”

“I think when you have all these conversion opportunities, whether it’s a conference with some feature film or it’s a streamed show, it really can create tremendous impact in the film and TV community,” he said. “We think that we have a lot of momentum, of course, because we are in Miami and are not only the gateway to the rest of the world, but we are a very sophisticated market. We’ve got venues and we’ve got the crewing. We’ve got the locations and the diversity of people.”