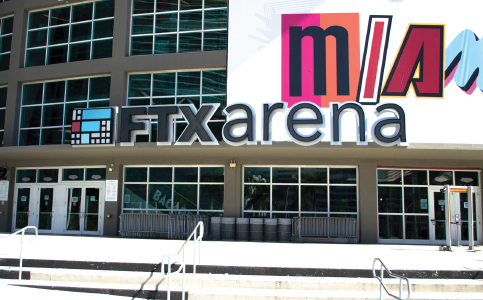 Bankrupt FTX will pay more for basketball arena naming rights even as the county works to remove the crypto firm’s name, Mayor Daniella Levine Cava told commissioners last week, and a new naming rights deal with someone else is on the way.

“There are companies coming forward speaking to our staff, to the Heat” about naming rights, the mayor said as commissioners pressed her for details. She did not specify how much FTX would be paying, what companies had approached the county, or when a deal might be unveiled other than “the near future.”

The arena was named for American Airlines until the contract expired at the end of 2019. The county took more than two years to find a new sponsor, FTX, in a $135 million 19-year deal in which FTX has paid $20 million. This month the arena has had three names, now Miami-Dade Arena, as the county seeks a deal.

“Obviously we’re in a different position than we were two years ago and we’re very hopeful that we’ll be able to secure a very worthwhile deal in the near future,” the mayor said.

Commissioner Raquel Regalado pressed the mayor on what the county is doing to fund the new department it created to use the arena sponsorship funds in anti-poverty and gun violence work.

“So, what happens to these people who are in the Peace and Prosperity Department, like when do we run out of money to pay them?” she asked. “What happens to their salary? What are they doing?”

The mayor said the program continues using the funds already received and the county expects an FTX payment this month. “Any subsequent deal will carry all of the same terms and conditions related to that program,” she said.

Chairman Oliver Gilbert III said Keon Hardemon is the commission’s point person because the arena is in his district, and “when a new deal is proffered it’s probably going to come through him.”